Okay, so I had just dropped off Alyssa at Kindergarten, and laid Cade down for a nap. I sit down at the computer and start checking email, reading blogs etc.

All of a sudden this teenage boy opens my sliding glass door in back, and runs right into my house. Within about 2 seconds I am standing in my kitchen with an approximately 17 yr. old boy who I have never seen before in my life. After screaming to myself in the back of my mind I said, "Who are you and what are you doing in my house?"
He was breathing so hard you could tell he had been running. I am like, "Are you okay?" "Is someone chasing you?" He said, "Yes."
He seemed like a pretty nice kid, but he was very shook up, and obviously felt stupid for coming in my house, but more scared of what would happen to him if he didn't do it.
I immediately thought back to when I was in grade school, and they taught us to run away from strangers. And to go in a house even if we didn't know who they were, just to get away from the strangers if they began chasing us.
It totally scared the crap out of me at first, but after talking to him for a minute I wasn't really worried, this boy did not look scary, but your mind starts racing with all the things that could happen, and different things you've seen on the news. I asked him if I needed to call the police, but he said no. He said he didn't think they would have knives or guns. (These days you never know.) Then I thought what if they would have followed him all the way up to the back of my house, and also come inside. What if they would have had those awful things. And my heart started pounding again.
Basically he was out working in his yard, and these boys drove up calling his name, and he said they weren't very happy. So he just took off. I guess my house was the closest thing he could find to go in. Don't ask me why he didn't go in his own, and lock the doors.
He told me his name and where he lived (I didn't know him). He said he was fairly new to the area. He told me he didn't know the boys chasing him, and he didn't know why anyone would be chasing him. I don't think I was getting the whole story though. :-)

He was here about 10 minutes before he dared leave to go back home. We looked outside in every direction, and couldn't see them again. I felt kind of bad for him, but didn't really want him staying at my house either.

Hopefully he was okay when he got back home. Who knows why he wasn't in school.
Anyway, it totally freaked me out. So now all of my doors are locked, and will stay that way with the curtains shut. At least until I quit being so freaked out.

Who said small towns were quiet? I've had more adventure here than I ever did in P.G. Ha Ha
Posted by Eric and Andrea at 12:22 PM 7 comments:

**Tagged by my niece Hydee**

1. I have a blanket that I snuggle with at night from when I was a baby. And since I am 35 years old, I'd say that's a pretty big quirk!

2. I love country dancing. That is how me and my husband met. We both really loved it, and continued to go for a few years after we got married. I even remember going when I was 8 months pregnant with Preston. We haven't been for a long time, and I really miss it!

3. I hate ketchup!!! I can handle it on hotdogs, and in a hamburger, but to dip fries in it and stuff makes me want to gag! But, I LOVE FRY SAUCE!!!!

4. I can't stand my bed not to be made. Every morning that is the first thing I do when I wake up, no matter what.

5. I am really not a fan of chocolate. I love kit kats, and some kinds of chocolate if they have other things in them, but I despise chocolate chips, chocolate cake, chocolate ice cream, plain m&m's, and hershey's kisses to name a few. Since my mom says I must be adopted because of this I guess it is a pretty big quirk to most people! Strange though, I do like hot chocolate, and most brownies. Go figure!

6. I have a really bad habit of picking my lip. Literally pulling at it until it bleeds. Everyone has tried to get me to quit, but I just can't or won't. It is a nervous habit that I've had for YEARS! 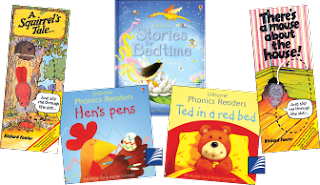 Hey everyone!!
I am doing an Usborne booth in Ephraim on Saturday, so I have opened an eShow to go along with it! It's just a quick one, as I will be closing by Monday night at midnight, but I thought I'd let anyone know in case they wanted to do some Christmas shopping!
Just click the link to the right, and place your order off my website under active eShows.
I will probably do one, or possibly two more before Christmas, we'll just have to see how it goes!
I can also take credit card orders over the phone if you want to give me a call.
Let me know if I can help you in any way!!
And don't forget.....It's not too late to earn free books by having your own show! :-)
Posted by Eric and Andrea at 2:45 PM No comments:

I Am Now A Vampire Lover!!!

Isn't it appropriate too, just in time for Halloween???

I just finished Breaking Dawn today. Last Wednesday I had to go up North so I called my little sister and asked to borrow her books. They were there waiting for me. I read Twilight on Thursday, New Moon on Friday, Eclipse over Saturday and Sunday, and it took me until this morning to finish Breaking Dawn.
I loved them!!!
I now understand all the hype, they were exciting, intense and different. I am now anxiously awaiting the movie along with everyone else!!
I still have to go online and read Midnight Sun, but that will have to wait until tomorrow. :-)

Last Saturday we decided to take the kids and go to the Snow College homecoming parade. It only lasts about 30-40 minutes, and the kids get tons of candy and prizes. They have a lot of fun, and Alyssa loves to wave at all the "princesses". They didn't have a parade when I went there that I remember, but it is really cool! I know I would have loved it. Being down here this close to Snow sure brings back a lot of memories.
Go Badgers!

We had also wanted to take them to a Pumpkin Patch, and there really isn't one down here. We decided to go to the Big Red Barn in Santaquin to see what they had to offer. We ended up going on a hayride and out to the pumpkin patch to pick some pumpkins, and take a few pictures. The day didn't get any warmer, and the wind didn't help, but we had a lot of fun and really enjoyed being together as a family!

I brought the camera along to highlight our day and Eric put together a great video! I have been trying to post it for 3 days, but it has been so big it took a little fixing.
ENJOY! 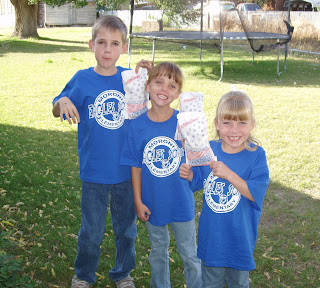 At Moroni Elementary they have a tradition, that every Friday or so is called "Popcorn Friday". It is something that the kids really like, and look forward to.
It is a fun way that they try to encourage school spirit, and a way to end school and start the weekend.
Up until now, they had to wear the school color blue in order to get the popcorn, but their official school t-shirts arrived this week, so now they have to wear those. Otherwise popcorn is 25 cents.
When they came home they all looked so cute together that I decided to take a picture.
Posted by Eric and Andrea at 4:21 PM 8 comments:

I had the not so good pleasure of going to the dentist this morning. I had to have two gum tissue grafts done. I have had them done before, and they really ARE NOT my favorite thing.
You would think I would quit brushing my teeth so hard, and wearing the gums down, but I haven't seemed how to figure out how to do that yet. :-)

Anyway, they had to cut some of the gum from the roof of my mouth and graft it to the bottom gums outside two of my bottom teeth. Each side needed one, and so I was literally numb EVERYWHERE. Now the shots are wearing off, and the roof of my mouth is SO SORE! So I say, thank heaven for Lortab!!!
I am also so hungry, but limited as to what I can eat, or even feel like eating.
The good news is, maybe this procedure will help me lose 10 lbs!

Sorry, no pictures! It definately wouldn't have been my most attractive moment, so I thought I'd skip that part this time!
Posted by Eric and Andrea at 3:50 PM 6 comments: